I think everyone already knows my opinions about MERGE and why I stay away from it. But here's another (anti-)pattern I see all over the place when people want to perform an upsert (update a row if it exists and insert it if it doesn't):

This looks like a pretty logical flow that reflects how we think about this in real life:

But this is wasteful.

Locating the row to confirm it exists, only to have to locate it again in order to update it, is doing twice the work for nothing. Even if the key is indexed (which I hope is always the case). If I put this logic into a flow chart and associate, at each step, the type of operation that would have to happen within the database, I'd have this: Notice that all paths will incur two index operations.

More importantly, performance aside, unless you both use an explicit transaction and elevate isolation level, multiple things could go wrong when the row doesn't already exist:

That last one is the worst, IMHO, because it's the one that potentially corrupts data. Deadlocks and exceptions can be handled easily with things like error handling, XACT_ABORT, and retry logic, depending on how frequently you expect collisions. But if you are lulled into a sense of security that the IF EXISTS check protects you from duplicates (or key violations), that is a surprise waiting to happen. If you expect a column to act like a key, make it official and add a constraint.

"Many people are saying…"

Make sure you read all the comments on all three posts, too.

I've fixed many deadlocks in my career by simply adjusting to the following pattern (ditch the redundant check, wrap the sequence in a transaction, and protect the first table access with appropriate locking):

Why do we need two hints? Isn't UPDLOCK enough?

It's a little more code, but it's 1000% safer, and even in the worst case (the row does not already exist), it performs the same as the anti-pattern. In the best case, if you are updating a row that already exists, it will be more efficient to only locate that row once. Combining this logic with the high-level operations that would have to happen in the database, it is slightly simpler: 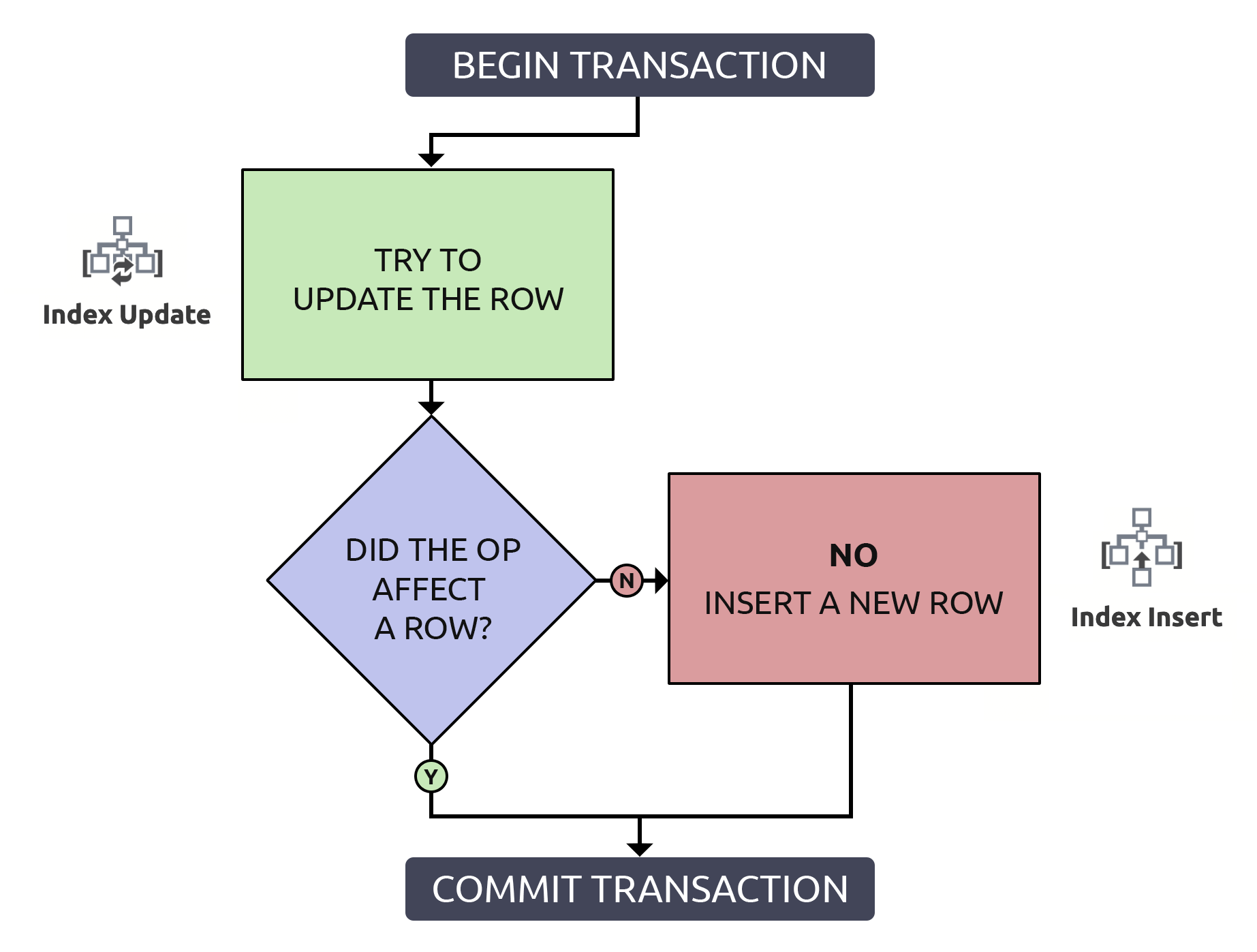 In this case, one path only incurs a single index operation.

But again, performance aside:

In both cases, the writer who won the race loses their data to anything the "loser" updated after them.

Note that overall throughput on a highly concurrent system might suffer, but that is a trade-off you should be willing to make. That you're getting lots of deadlock victims or key violation errors, but they're happening quickly, is not a good performance metric. Some folks would love to see all blocking removed from all scenarios, but some of that is blocking you absolutely want for data integrity.

But what if an update is less likely?

It is clear that the above solution optimizes for updates, and assumes that a key you're trying to write to will already exist in the table as least as often as it doesn't. If you would rather optimize for inserts, knowing or guessing that inserts will be more likely than updates, you can flip the logic around and still have a safe upsert operation:

There's also the "just do it" approach, where you blindly insert and let collisions raise exceptions to the caller:

The cost of those exceptions will often outweigh the cost of checking first; you'll have to try it with a roughly accurate guess of hit/miss rate. I wrote about this here and here.

What about upserting multiple rows?

The above deals with singleton insert/update decisions, but Justin Pealing asked what to do when you are processing multiple rows without knowing which of them already exist?

Assuming you are sending a set of rows in using something like a table-valued parameter, you would update using a join, and then insert using NOT EXISTS, but the pattern would still be equivalent to the first approach above:

If you're getting multiple rows together in some other way than a TVP (XML, comma-separated list, voodoo), put them into a table form first, and join to whatever that is. Be careful not to optimize for inserts first in this scenario, otherwise you'll potentially update some rows twice.

These upsert patterns are superior to the ones I see all too often, and I hope you start using them. I will point to this post every time I spot the IF EXISTS pattern in the wild. And, hey, another shoutout to Paul White (sql.kiwi | @SQK_Kiwi), because he is so excellent at making hard concepts easy to understand and, in turn, explain.

And if you feel you have to use MERGE, please don't @ me; either you have a good reason (maybe you need some obscure MERGE-only functionality), or you didn't take the above links seriously.