Earlier this week, I posted a follow-up to my my recent post about STRING_SPLIT() in SQL Server 2016, addressing several comments left on the post and/or sent to me directly:

After that post was mostly written, there was a late-breaking question from Doug Ellner:

How do these functions compare with table-valued parameters?

Now, testing TVPs was already on my list of future projects, after a recent twitter exchange with @Nick_Craver over at Stack Overflow. He said they were excited that STRING_SPLIT() performed well, because they were unhappy with the performance of sending ~7,000 values in through a table-valued parameter.

I created a simple table that mimicked what they were doing (selecting about 10,000 values from a 3+ million row posts table), but for my tests, it has far fewer columns and fewer indexes:

I also created an In-Memory version, because I was curious if any approach would work differently there:

Now, I wanted to create a C# app that would pass in 10,000 unique values, either as a comma-separated string (built using a StringBuilder) or as a TVP (passed from a DataTable). The point would be to retrieve or update a selection of rows based on a match, either to an element produced by splitting the list, or an explicit value in a TVP. So the code was written to append every 300th value to the string or DataTable (C# code is in an appendix below). I took the functions I created in the original post, altered them to handle varchar(max), and then added two functions that accepted a TVP – one of them memory-optimized. Here are the table types (the functions are in the appendix below):

I also had to make the Numbers table bigger in order to handle strings > 8K and with > 8K elements (I made it 1MM rows). Then I created seven stored procedures: five of them taking a varchar(max) and joining with the function output in order to update the base table, and then two to accept the TVP and join directly against that. The C# code calls each of these seven procedures, with the list of 10,000 posts to select or update, 1,000 times. These procedures are also in the appendix below. So just to summarize, the methods being tested are:

We'll test retrieving the 10,000 values, 1,000 times, using a DataReader – but not iterating over the DataReader, since that would just make the test take longer, and would be the same amount of work for the C# application regardless of how the database produced the set. We'll also test updating the 10,000 rows, 1,000 times each, using ExecuteNonQuery(). And we'll test against both the regular and memory-optimized versions of the Posts table, which we can switch very easily without having to change any of the functions or procedures, using a synonym:

I kicked off the application, ran it several times for each combination to ensure compilation, caching, and other factors weren't being unfair to the batch executed first, and then analyzed the results from the logging table (I also spot-checked sys.dm_exec_procedure_stats to make sure none of the approaches had significant application-based overhead, and they did not).

I struggle with data visualization sometimes – I really tried to come up with a way to represent these metrics on a single chart, but I think there were just far too many data points to make the salient ones stand out.

You can click to enlarge any of these in a new tab/window, but even if you have a small window I tried to make the winner clear through use of color (and the winner was the same in every case). And to be clear, by "Average Duration" I mean the average amount of time it took for the application to complete a loop of 1,000 operations. 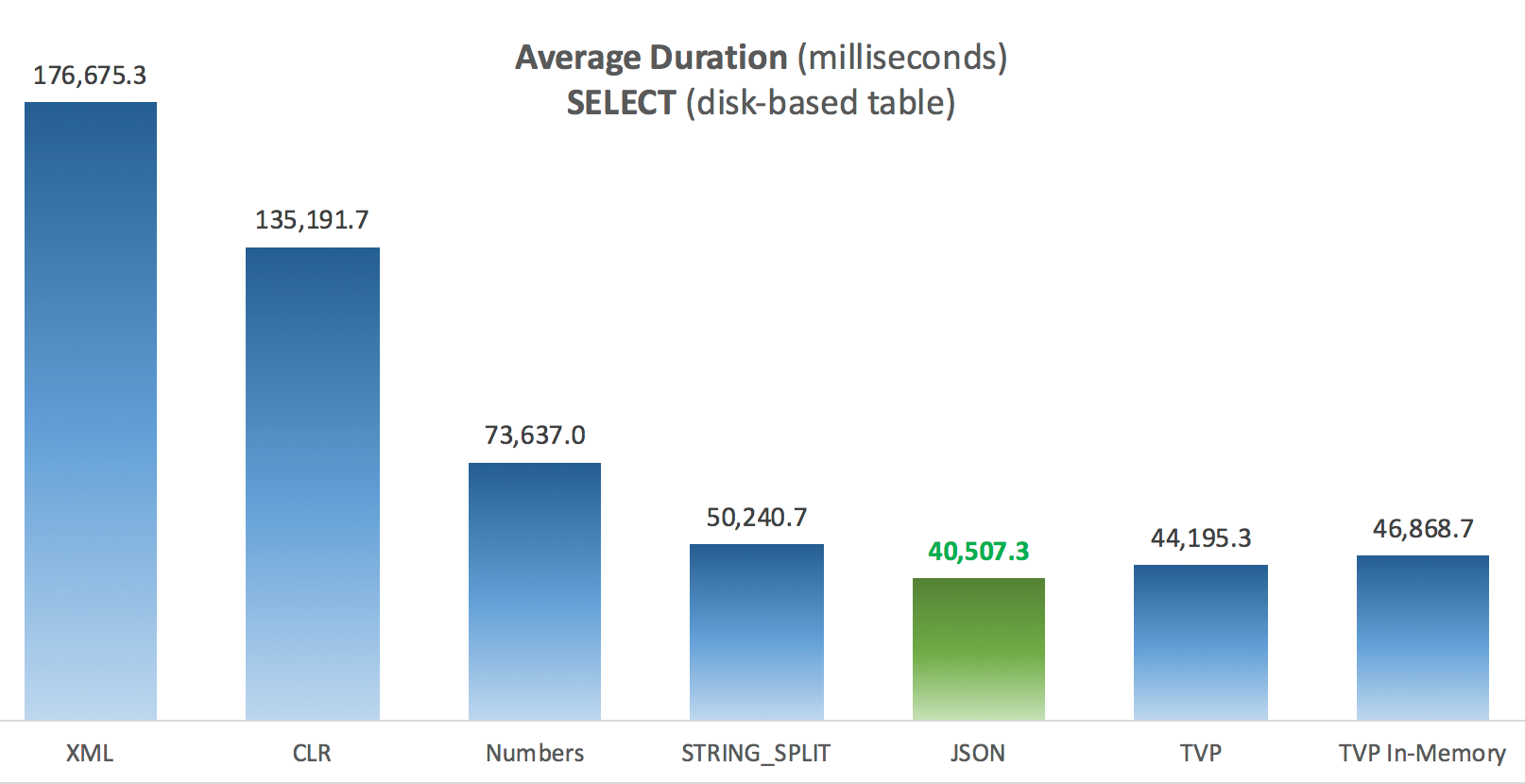 The most interesting thing here, for me, is how poorly the memory-optimized TVP did when assisting with an UPDATE. It turns out that parallel scans are currently blocked too aggressively when DML is involved; Microsoft has recognized this as a feature gap, and they are hoping to address it soon. Note that parallel scan is currently possible with SELECT but it is blocked for DML right now. (It will not be resolved in SQL Server 2014, as these specific parallel scan operations are not available there for any operation.) When that is fixed, or when your TVPs are smaller and/or parallelism isn't beneficial anyway, you should see that memory-optimized TVPs will perform better (the pattern just doesn't work well for this particular use case of relatively large TVPs).

A little more consistency here – the four methods on the right are relatively even, while the three on the left seem very undesirable by contrast. Also pay particular attention to absolute scale compared to the disk-based tables – for the most part, using the same methods, and even without parallelism, you end up with much quicker operations against memory-optimized tables, leading to lower overall CPU usage. For this specific test, with a specific data size, distribution, and number of parameters, and on my particular hardware, JSON was a consistent winner (though marginally so). For some of the other tests in previous posts, though, other approaches fared better. Just an example of how what you're doing and where you're doing it can have a dramatic impact on the relative efficiency of various techniques, here are the things I've tested in this brief series, with my summary of which technique to use in that case, and which to use as a 2nd or 3rd choice (for example, if you can't implement CLR due to corporate policy or because you're using Azure SQL Database, or you can't use JSON or STRING_SPLIT() because you aren't on SQL Server 2016 yet). Note that I didn't go back and re-test the variable assignment and SELECT INTO scripts using TVPs – these tests were set up assuming you already had existing data in CSV format that would have to be broken up first anyway. Generally, if you can avoid it, don't smoosh your sets into comma-separated strings in the first place, IMHO.

For Doug's specific question: JSON, STRING_SPLIT(), and TVPs performed rather similarly across these tests on average – close enough that TVPs are the obvious choice if you're not on SQL Server 2016. If you have different use cases, these results may differ. Greatly.

Which brings us to the moral of this story: I and others may perform very specific performance tests, revolving around any feature or approach, and come to some conclusion about which approach is fastest. But there are so many variables, I will never have the confidence to say "this approach is always the fastest." In this scenario, I tried very hard to control most of the contributing factors, and while JSON won in all four cases, you can see how those different factors affected execution times (and drastically so for some approaches). So it is always worth it to construct your own tests, and I hope I have helped illustrate how I go about that sort of thing.

Please, no nit-picking about this code; it was literally thrown together as a very simple way to run these stored procedures 1,000 times with true lists and DataTables assembled in C#, and to log the time each loop took to a table (to be sure to include any application-related overhead with handling either a large string or a collection). I could add error handling, loop differently (e.g. construct the lists inside the loop instead of reuse a single unit of work), and so on.

Here were the functions edited to support varchar(max) (the CLR function already accepted nvarchar(max) and I was still reluctant to try to change it):

And finally, the logging table and procedure: