When cardinality estimates are incorrect, the parallel threads doing the query work are given uneven amounts of work to do. The typical case is where one thread is given all the work, or way more work than the other threads. This means that those threads that finish processing their rows (if they were even given any) before the slowest thread register a CXPACKET from the moment they finish until the slowest thread finishes. This problem can lead to a seeming explosion in CXPACKET waits occurring and is commonly called skewed parallelism, because the distribution of work between the parallel threads is skewed, not even.

I’ll walk through a contrived example to show how to identify such cases.

First off, I’ll create a scenario where a table has wildly inaccurate statistics, by manually setting the number of rows and pages in an UPDATE STATISTICS statement (don’t do this in production!):

So my table only has a few thousand rows in it, but I’ve faked it having 10 million rows.

Now I’ll create a contrived query to select the top 500 rows, which will go parallel as it thinks there are millions of rows to scan.

And set that running.

Now I can look at the CXPACKET waits that are occurring using a simple script to look at the sys.dm_os_waiting_tasks DMV:

If I execute this a few times, eventually I see some results showing skewed parallelism (I stripped off the query plan handle link and curtailed the resource description, for clarity, and notice I put in the code to grab the SQL text if you want that too):

The control thread is the one with exec_context_id set to 0. The other parallel threads are those with exec_context_id higher than 0, and they’re all showing CXPACKET waits apart from one (note that exec_context_id = 2 is missing from the list). You’ll notice that they all list their own session_id as the one that’s blocking them, and that’s correct because all the threads are waiting for another thread from their own session_id to complete. The database_id is the database in whose context the query is being executed, not necessarily the database where the problem is, but it usually is unless the query is using three-part naming to execute in a different database.

With the query_plan column in the query output (which I removed for clarity), you can click on it to bring up the graphical plan and then right-click and select View with SQL Sentry Plan Explorer. This shows as below: 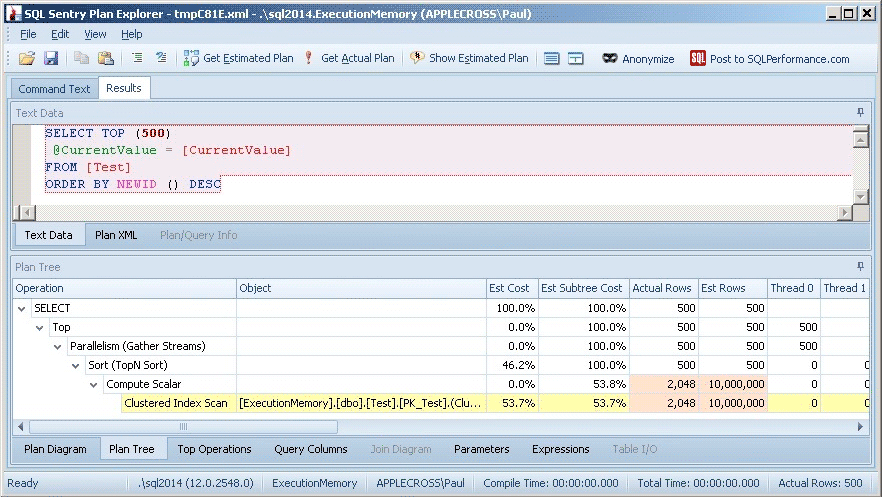 I can immediately see that there’s a cardinality estimate issue, as the Actual Rows for the Clustered Index Scan is only 2,048, compared to 10,000,000 Est (Estimated) Rows.

If I scroll across, I can see the distribution of rows across the parallel threads that were used:

Lo and behold, only a single thread was doing any work during the parallel portion of the plan – the one that didn’t show up in the sys.dm_os_waiting_tasks output above.

In this case, the fix is to update the statistics for the table.

In my contrived example that won’t work, as there haven’t been any modifications to the table, so I’ll re-run the set up script, leaving out the UPDATE STATISTICS statement.

The query plan then becomes:

Where there’s no cardinality problem and no parallelism either – problem solved!

If you see CXPACKET waits occurring, it’s easy to check for skewed parallelism, using the method described above. All the cases I’ve seen have been due to cardinality estimation issues of one kind or another, and often it’s simply a case of updating statistics.

Until next time, happy troubleshooting!