Previously, I covered the basics of storage subsystem metrics and testing in my article Analyzing I/O Subsystem Performance for SQL Server, including an introduction of CrystalDiskMark 4.0. CrystalDiskMark was recently rewritten to use Microsoft DiskSpd for its testing, which makes it an even more valuable tool for your initial storage subsystem testing efforts. DiskSpd provides the functionality needed to generate a wide variety of disk request patterns, which can be very helpful in diagnosis and analysis of I/O performance issues with a lot more flexibility than older benchmark tools like SQLIO. It is extremely useful for synthetic storage subsystem testing when you want a greater level of control than that available in CrystalDiskMark.

Now, we are going to dive a little deeper into how to actually use Microsoft DiskSpd to test your storage subsystem without using CrystalDiskMark 4.0. In order to do this, you’ll need to download and unzip DiskSpd. To make things easier, I always copy the desired diskspd.exe executable file from the appropriate executable folder (amd64fre, armfre or x86fre) to a short, simple path like C:\DiskSpd. In most cases you will want the 64-bit version of DiskSpd from the amd64fre folder.

Once you have the diskspd.exe executable file available, you will need to open a command prompt with administrative rights (by choosing “Run as Administrator”), and then navigate to the directory where you copied the diskspd.exe file.

Here are some of the command line parameters that you will want to start out with:

You will also want to specify the test file location and the file name for the results at the end of the line. Here is an example command line:

This example command line will run a 30 second random I/O test using a 20GB test file located on the T: drive, with a 25% write and 75% read ratio, with an 8K block size. It will use eight worker threads, each with four outstanding I/Os and a write entropy value seed of 1GB. It will save the results of the test to a text file called DiskSpeedResults.txt. This is a pretty good set of parameters for a SQL Server OLTP workload.

Running the test starts with a default five second warm up time (before any measurements actually start), and then the actual test will run for the specified duration in seconds with a default cool down time of zero seconds. When the test finishes, DiskSpd will provide a description of the test and the detailed results. By default this will be a simple text summary in a text file using the file name that you specified, which will be in the same directory as the diskspd executable.

Here are what the results look like for this particular test run on my workstation. 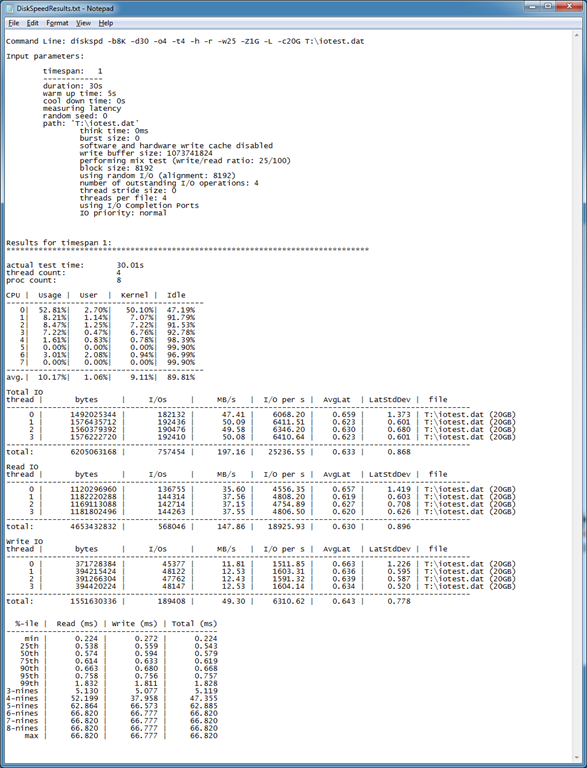 The first section of the results gives you the exact command line that was used for the test, then specifies all of the input parameters that were used for the test run (which include the default values that may not have been specified in the actual command line). Next, the test results are shown starting with the actual test time, thread count, and logical processor count. The CPU section shows the CPU utilization for each logical processor, including user and kernel time, for the test interval.

The more interesting part of the test results comes next. You get the total bytes, total I/Os, MB/second, I/O per second (IOPS), and your average latency in milliseconds. These results are broken out for each thread (four in our case), with separate sections in the results for Total IO, Read IO, and Write IO. The results for each thread should be very similar in most cases. Rather than initially focusing on the absolute values for each measurement, I like to compare the values when I run the same test on different logical drives, (after changing the location of the test file in the command line), which lets you compare the performance for each logical drive.

The last section of the test results is even more interesting. It shows a percentile analysis of the distribution of the latency test results starting from the minimum value in milliseconds going up to the maximum value in milliseconds, broken out for reads, writes, and total latency. The “nines” in the %-ile column refer to the number of nines, where 3-nines means 99.9, 4-nines means 99.99, etc. The reason why the values for the higher percentile rows are the same is because this test had a relatively low number of total operations. If you want to accurately characterize the higher percentiles, you will have to run a longer duration test that generates a higher number of separate I/O operations.

What you want to look for in these results is the point where the values make a large jump. For example, in this test we can see that 99% of the reads had a latency of 1.832 milliseconds or less. As you can see, running DiskSpd is actually pretty simple once you understand what the basic parameters mean and how they are used. Not only can you run DiskSpd from an old-fashioned command line, you can also run it using PowerShell. DiskSpd also gives you a lot more detailed information than you get from SQLIO. The more complicated part of using DiskSpd is analyzing and interpreting the results, which is something I will cover in a future article.

52 thoughts on “Using Microsoft DiskSpd to Test Your Storage Subsystem”