Microsoft explains that "This Enterprise Edition image is optimized for OLTP workloads and is intended for VM sizes including A4, A7, A8 and A9. Once deployed, the VM comes with Windows Storage Spaces pre-configured." Microsoft also does some instance-level configuration work on SQL Server 2014, although they do not go far enough with what I would consider to be standard best practices.

They create eight tempdb data files that are all 25600MB in size, with an autogrow increment of 1024MB, which is a good default choice. They also enable TF1117 and TF1118 as start-up trace flags, which are also good choices for SQL Server. Finally, Microsoft also enables instant file initialization and lock pages in memory in the operating system, which I also agree with.

I would prefer that Microsoft also made some changes to these instance-level configuration options:

Backup compression should be enabled by default in most cases. Cost threshold for parallelism often should be raised to a higher value than the default of 5, depending on your workload. Max degree of parallelism usually should be changed to a non-default value based on the number of cores in a NUMA node. This setting also depends on your workload. Max server memory should be set to a non-default value based on the amount of RAM in the virtual machine and what you are running (besides the SQL Server database engine) on the VM. Finally, I think optimize for ad hoc workloads should be enabled, pretty much in all cases.

In Microsoft's defense, it would be difficult to make a satisfactory configuration choice for some of these items without knowing (in advance) the details of your VM size and expected database server workload. That leaves the task up to you, just like with an on-premises SQL Server instance.

Looking at the comparative specifications for these recommendations in Table 1, it is hard to understand why you would want to choose an A4 Standard machine, since it costs the same amount per hour as the larger A7 or A8 Standard machines. Looking at the online documentation, it is not initially very clear what the actual difference is between an A7 and an A8 Standard machine. Digging a little deeper, the A8 Standard machine is considered a Compute Intensive instance, which is supposed to use a faster 2.6GHz Intel Xeon E5-2670 processor, along with two network adapters (one 10Gbps and one 32Gbps RDMA capable).

The A7 Standard virtual machine uses a somewhat slower 2.2GHz Intel Xeon E5-2660 processor, while the network connectivity appears to be standard 1Gbps Ethernet. While this sounds like a significant difference in processor and network performance, it is not really the main issue with the A-series virtual machines for SQL Server usage.

The main problem with all of the A-series virtual machines is the pretty miserable I/O subsystem performance, even though Microsoft has pre-configured the disk subsystem with Windows Storage Spaces to get best performance possible given the inherent performance limitations of the A-series virtual machines and hosts. Figure 1 shows the CrystalDiskMark results for the E: drive from an A4 Standard machine from the East US Azure data center, which is meant for transaction log files. 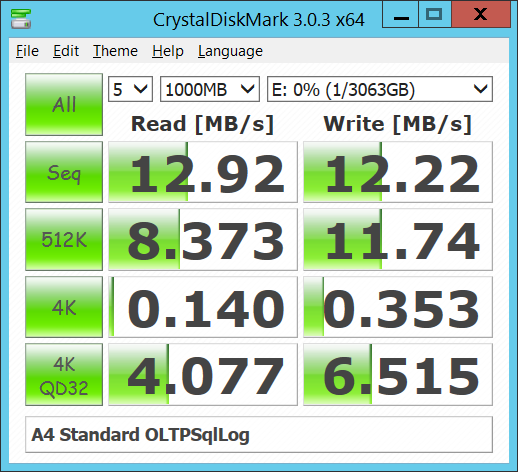 Unfortunately, the permanent drives for your SQL Server data and log files also have pretty substandard I/O performance in CrystalDiskMark, as shown in Figures 2 and 3. The F: drive (for SQL Server data files) has slightly better results than the E: drive, but both drives have a very low level of performance for SQL Server.

It seems pretty clear that the D-series machines are better for SQL Server usage than the A-series machines. It also makes sense to pay close attention to the sizing and pricing of the virtual machine you decide to provision for SQL Server, since you can get more RAM at the same hourly cost. The two best choices from a performance perspective are the D13 or D14 Standard virtual machines.

The preconfigured SQL Server 2014 instances from the Azure gallery can save you a lot of money in SQL Server licensing costs, and they have much of the necessary configuration work already complete in the base image. You should still go in and make a few final configuration changes based on your preference and workload. Finally, you should take the time to run some performance benchmarks on your virtual machine so that you understand the level of performance that it can deliver.